This barn was converted about 30 years ago from cow shed to a dwelling. Originally thatched by Tony Cardwell and maintained for the last 20 years by Master Thatcher’s South.

In that time we have re-ridged the property and dressed and tightened the water reed coat every 2-3 years, the owners at that time Andrew and Carole were hoping to eke out the roof for a few more years until a re-thatch was required.

Andrew and Carole sold the property in July 2019 to Alex and Danielle who soon after the purchase contacted us to discuss the re-thatching of the barn. It was decided Master Thatcher’s South would re-thatch the property in May 2020 not only replacing the roof but installing a fire barrier and new battens.

Forward to March this year and Covid 19 struck, we had work postponed and subsequently Alex and Danielle were happy for us to start work in April. They had an annexe where we could be self-contained with no need to enter their home and self-distancing possible.

I had arranged for the scaffolding to be erected and a local bricklayer to rebuild the chimney to allow it to be 1.8 metres above the thatch to conform to the insurers requirements prior to this it was barely 1 metre above the thatch. We decided to remove all the old thatch prior to re-thatching so all the mess was out of the way. Fortunately for us a neighbour had agreed to allow us to dispose of the old thatch in a field close by which was a godsend. We removed the old thatch, battens and the aluminium foil fire barrier which may have been acceptable 30 years ago but not these days. Removing the old battens became a bit of a trial as unusually the plaster board was positioned above the rafters rather than between them so despite our best efforts there was some damage to the ceilings, fortunately Alex and Danielle were not concerned as they had planned for alterations to the internal structure.

Prior to the re-thatching we fixed Thatchfirewall which is a flexible fire barrier supplied by Thatching Advisory Services, a breathable waterproof membrane and 25x50mm treated battens.

The Turkish water reed supplied by Tristan Johnson Thatching Supplies arrived courtesy of K Drury Transport who picked the reed up from North Devon and delivered to site and stacked up in the driveway with the help of their telehandler which was no mean feat as there were 3500 bundles of reed.

We started the re-thatch on the larger front elevation which was 34ft eaves to ridge and 70ft long at its widest point. Normally we would thatch to a depth of 14 inches above the battens, with this barn conversion there were areas that needed to be in excess of 20 inches to achieve a level surface across the roof.

Throughout the time we were removing the old thatch we were battling against the elements with the tarpulins up and down a number of times however once the new reed was going on the sun god was with us, almost too hot at times.The hospitality shown by Alex and Danielle was second to none. Fortunately Danielle had got the lockdown baking perfected and a plentiful supply of freshly baked cakes were provided and Alex happy to share a cold one at the end of the day which was much appreciated by Paul , Scott and I.

Eventuly the water reed coat was complete and the combed wheat ridge was started with a block cut, wrapover and a decorative hazel cross spar pattern. Danielle had purchased some straw fox finials which were positioned on the ridge. A final dressing of the coat and straighten of the eaves to complete another re- thatch for Master Thatchers South.

Please see some pictures of this project: 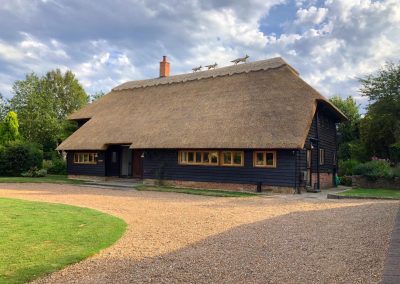 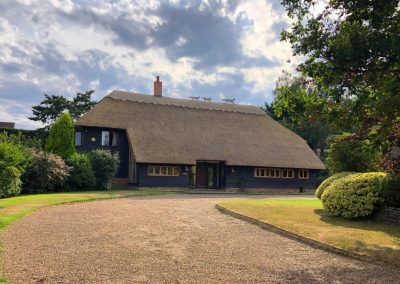 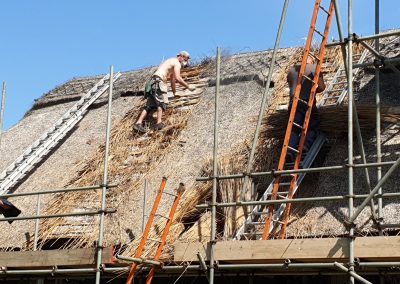 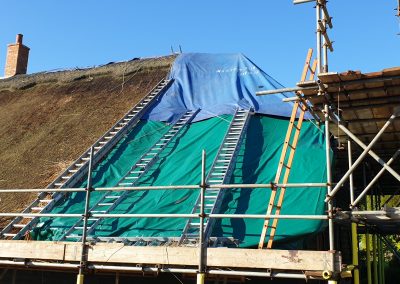 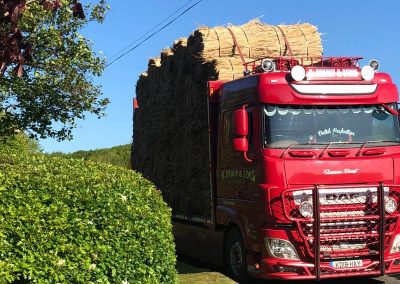 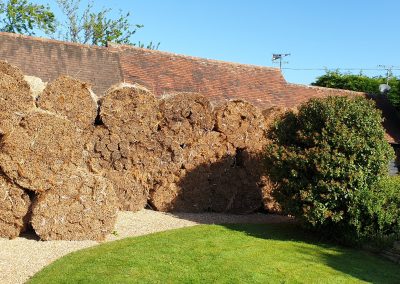 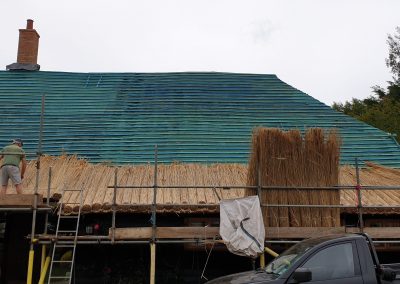 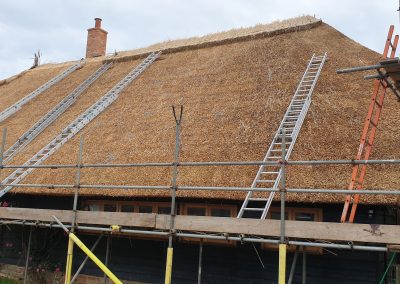 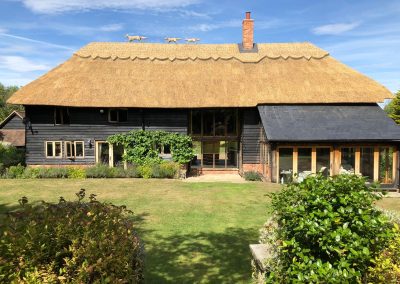 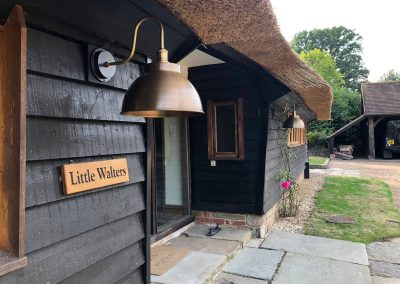 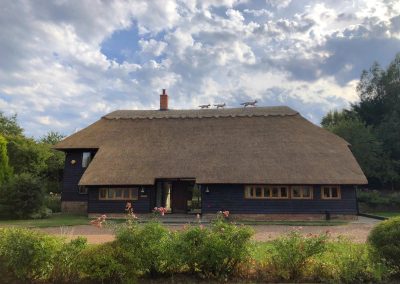 Well worth the wait!

My wife and I bought a Thatched Barn conversion and quickly got Nick and the team from Master Thatchers South round to put a complete new thatch on. Through the whole process it was a pleasure dealing with the team. They were always available to answer questions and put any fears of a taking on a big job like this as new owner out of our head. MTS took care of everything, from organising the scaffolding, to disposal of the old thatch, to cleaning up of the once they had finished. Over the three months of the job, the team turned up everyday rain or shine and kept us informed of how things were going. If they found anything wrong, it was fixed. We lost 7 working days due to rain, but the MTS team made sure the house was watertight. Even coming over to check if all was OK when the wind was blowing. I cannot recommend MTS enough, if you have a thatched property call Nick and the team.